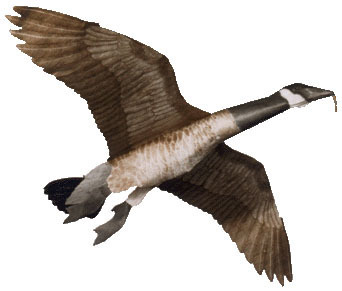 The Jackite Canada, Blue and Snow Goose were designed to be used as a decoy for the hunter. As the Jackite bird flaps it wings and banks on the air it really does decoy in live birds.

Click here to go to the video page to see different hunting videos.

Marguerite began the project of geese kites but with all the kites she designs its in her mind before actually creating a prototype. She pondered the head and neck of the goose, how does one design a 3-D head that is rounded, a more complex challenge then first imagine. She woke on night and cut out the head, making it 3-D. Viola, she had a goose head with a rounded neck.

She spent countless hours designing each bird by cutting it out of Tyvek and watching that prototype fly, then cutting out another bird with changes she realized from the previous version, until the design was completed. Most designs took over a month to complete.

The Jackite geese have a 48 inch wingspan and comes in a 3 inch mailing tube. It has a flexing fiberglass rod that is installed across the wings which is how the birds flaps it wings.

All Jackite Birds are made of DuPont Tyvek. Click here to learn about Tyvek.

I was passing a sporting goods store in my area and they had your mallard kite flying in front of their store. It looked so real I turned around and bought one immediately. I have already showed my friends and they are going to buy one or two. Keep up the good work. -Brad W.

Just a note to let you know how much I enjoy my "Lucky Duck". He evidently looked too real to the predator that attacked him. I think a hawk was trying to grab a quick and easy lunch since he saw the duck attached to a pole on my lake side dock. I had received many compliments on how real the duck looked to the boaters passing by. Evidently, they were not the only ones fooled! -Mr. Murray

Save this product for later