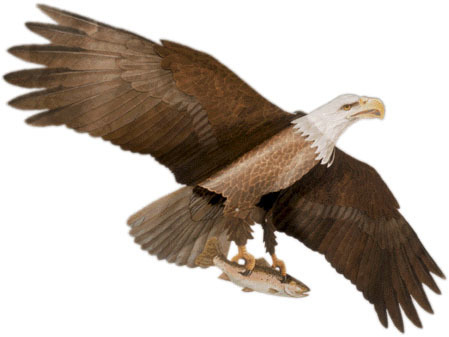 Designed by Marguerite Stankus, this kite took 8 months from start to finish. Marguerite worked meticulously to pattern the strong wing beat of an Eagle in flight. She wanted the Jackite American Bald Eagle to be a majestic kite considering the allure surrounding the symbol of Unites States.

Your Eagle can be flown as a natural windsock. Click here to find out more.

The Eagle looks quite real and attracts many admiring onlookers as it flaps its wings and soars across the air. You can fly it somewhat as you would a fighter kite, making it change direction by releasing some line and taking it up again. As the wind dies down, the Eagle slowly floats, wings still (not flapping) as if it was hunting an elusive prey to pounce on just like an Eagle would. Very realistic. I have made a couple of simple modifications for wind conditions by making holes forward and aft of the suggested swivel attachment hole to make it climb or fly close to the ground. Also, I made a 'cinch' string to be able to draw the crossbar (spar) down on the wing for flying in very light wind or raising the spar 2 inches in strong winds.

All Jackite Birds are made of DuPont Tyvek. Click here to learn about Tyvek.

A fun way to launch the bird is to place it on the ground and walk out about 100 feet of line. (Light weight line like 30# Spectra enhances flight.) A quick snap while stepping back 'catapults' the Eagle off the ground, flapping it's wings as it flies high in the air. (Causes a startling but pleasant surprise to unsuspecting passers-by as this large bird 'jumps' into the air in front of them, flapping its wings as it rises into the sky).

One day a Red-tailed Hawk actually attacked the Eagle, buzzing it several times before it flew off. It looks that real up in the air.

We were cruising down the Atlantic ICW this past fall. In SC north of Charleston, we passed a series of long docks out over the marsh which were all covered with various sea birds, Gulls, Cormorants, Pelicans etc.; all that is, save one which was flying one of your Bald Eagle kites. That was duly noted and we purchased one of your kites from a store in Charleston. We've seen many owl statues with Sea Gulls sitting on their heads, but nobody messes with the eagle. It held off several hundred angry Gulls south of Daytona Beach; they all fuss at it, but do not come near. Amazing thing! Thank you for your help in keeping our boat clean. -Jack Allen

Save this product for later